The International Children’s Exhibition of Fine Arts Lidice (ICEFA Lidice) was established in 1967 to commemorate the child victims from the Czech village of Lidice murdered by German Nazis, as well as all other children who have died in wars.

Although national initially, this exhibition became an international one in 1973 and since then it has become well known among children and teachers not only in our country but literally all over the world. In recent years, more than 25,000 very good works of art have come regularly by children not only from the Czech and Slovak republics but also from other 60-70 countries, including such distant ones as China, India, Japan, Kenya, Malaysia, Philippines, Srí Lanka or Zimbabwe.

ICEFA Lidice is a competition for children from 4 to 16 years from all types of schools and organisations working with children; individuals can participate as well. The main theme is recommended to the organizer by the Czech Comission for UNESCO and it is up to children, which technique they will choose for their work – accepted are paintings, drawings, prints, photographs, 3D art objects (metal, ceramics, wood, glass, textile, paper) and newly films – animations.

More about the competition and exhibition can be found on www.mdvv-lidice.cz/en. 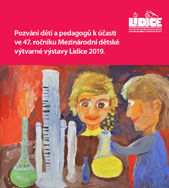