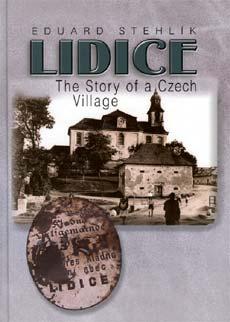 The book Lidice: The Story of a Czech Village was written by a historian dr. Eduard Stehlík from the Department of Defense of Czech Republic. It is the first time, the village was depicted in pictures and text in such historical detail. All the previously published books about Lidice were concerned just with one historical period – the events of the year 1942.

he idea to publish a brand new book about Lidice was born in the brain of the headmaster of the Lidice Memorial, Ing. Marie Tělupilová two years ago. In that time, the Lidice Memorial started the close cooperation with the Military Institute of History in Prague. In this same period, the Army Museum Žižkov opened the exhibition "Assassination - Operation Anthropoid 1941-1942" dedicated to the assassination of Reinhard Heydrich. In this exhibition, Lidice took a stately part.

The book "Lidice - The Story of a Czech Village"is dedicated to the memory of the 340 murdered inhabitants of the old Lidice. In total, it has 136 pages and is completed by 880 photographs and pictures. During its completation, the author was in cooperation with those who remember the Lidice's events. Apart from that, he studied archives and collected loads of unique material, much of which has been published for the first time. The publication goes through the village's life from the end of the 19 th century up to the present. Obviously, besides the detailed depiction of the story of the village in the years preceding the second world war, the largest portion of the text is focused on the sad events of the year 1942.

For the Lidice Memorial, the book has been published by the Prague publishing house V RÁJI in both English and Czech versions. They are preparing a German version that should come out on the 2nd Q.2004. The celebration of the book's christening (accompanied by large interest of several media) took place in the area of the Lidice Memorial in the Lidice Gallery on the 18th February 2004. Together with the book's author, the headmaster of the Lidice Memorial, Ing. Marie Tělupilová, the headmaster of the Military Institute of History in Prague, the lieutenant colonel Mgr. Aleš Knížek, representatives of the Czechoslovak legionary community, the Czech association of fighters for freedom, institutions that took part on the book's realization and many old - timers that remember the events in Lidice 1942, took place on the christening.